Even during the quiet of winter, the area around Sharpsburg, MD and the surrounding hills are strikingly beautiful.  For me, it was difficult to wrap my head around the history of the area because the serenity of the scenery, and the reality of the day memorialized here, starkly contrast one another.  One is incredibly peaceful, the other horrifically brutal. 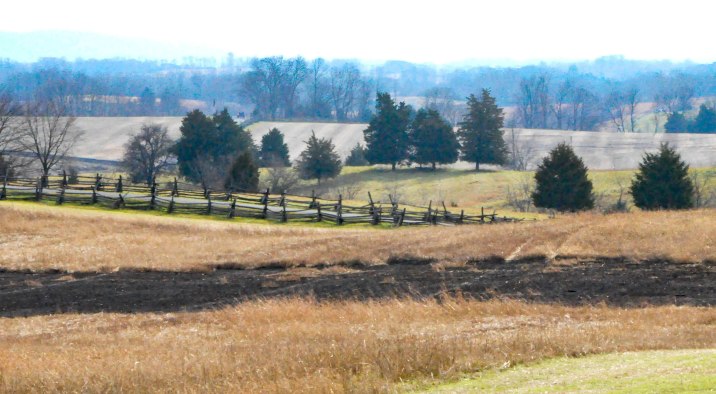 All in a Twelve Hour Battle

It’s hard to comprehend everything that is memorialized at Antietam when you consider the entire event took all of twelve hours.   75,000 Union troops under the command of General George B. McClellan faced 38,000 Confederate troops led by General Robert E. Lee. The exhibit goes into great detail regarding the strategy and skirmishes fought during the day, but the shocking point I tried to wrap my head around as I wandered the grounds was that at the end of the day, 22,700 men and women were dead, wounded or missing.  As the well curated display points out, that was more than the total of all men killed in battle during the American Revolution, the War of 1812 and The Spanish American War combined. Mentally, I was tempted to process that by thinking there were fewer people back then, so it seems like fewer would have died in conflict. Then I looked it up, and the number hit home in a more striking fashion.  Over 2% of the population of the U.S. at that time died in the American Civil War.  The same figure for the American Revolutionary War is roughly .9%, while for WW II, it was about .3%.  Wars in my lifetime have come no where near those kind of mortality rates, so I have no personal frame of reference for the sheer brutality of the Civil War, or the broader impact it had on the people of this country who lived during that time.  My friend Theresa perhaps said it best as she looked around the cemetery and pointed out, “These were people’s husbands, and fathers, and sons.”

There is a lot to process here.

I wished my husband Doug was with me to see this, because as a war veteran himself, he certainly would have been fascinated with the many exhibits that laid out in great detail how the day unfolded, and what strategies led to either success or deadly failures.  The one that stood out the most to me was “The Bloody Lane.”  From the perimeter road of the battlefield, you can stop and look down the old path towards the area where men marched over a small ridge, only to discover they had walked into a trap.  This vantage point makes it clear how that could have happened.  Entire waves of people were walking to their death because they didn’t understand the topography in front of them.   Standing on that same ground, I felt an internal struggle to warn them, which is obviously not possible, but also a testament to the deep humanity invoked by visiting this place.

Displays of Note (to me) in the Visitors Center

As a former Director of a local youth fife and drum corps, I was stunned to discover the youngest soldier to be killed in battle at Antietam was Charles “Charley” King, a drummer for Company F, 49th Pennsylvania Infantry.  He was wounded by an artillery shell, and died three agonizing days later at the age of 13.  I live in New England, where there weren’t any major battles fought in the Civil War, but where hundreds of thousands of drums were made and shipped to the war effort.   It’s difficult to comprehend how the sound of a drum communicating commands could possibly make it through the din of a battle unless you attend a historical reenactment and hear for yourself.  I’ve been to many, and I’m always shocked at how the rat-a-tat-tat of a snare drum cuts through the sound of musket fire, and the accompanying sounds of the fifes sound like sweet little birds in the midst of it all.  If you have the opportunity to attend a reenactment, I encourage it.  These groups tend to put a great deal of thought and effort into getting the details correct, so it is a very real and memorable way to understand what happened.

This quilt made by local resident Barbara Miller, whose relative’s farm was the scene of some of the most severe fighting of the battle.  It was made by her in the early 1850, and signed by many local families.  As a quilt maker myself, I can appreciate this particular gesture of memorializing the event.  The historical presentation of a community joined together through literally weaving their shared experience of grief into an object normally used to provide warmth and comfort was very poignant.

An exhibit here featured the manumission of Nancy Camel.  A manumission was a document issued to nineteenth century Americans of African descent to prove they had been released from enslavement.  The purchase and manumission of a person was recorded in the counter property records office.

There was also a display on the role of enslaved African Americans in the war, although I didn’t get the sense this was really a place to devoted to explore the struggles of the enslaved people at that time.  It did however, point out that the events of this battle led to President Lincoln claiming a “victory” (a somewhat dubious claim, given the day), and it was considered a pivotal event towards his issuance of the Emancipation Proclamation, which freed slaves in the Union – occupied areas of seceded states, and laid the groundwork for the 13th Amendment.

In addition to the women that I would typically expect to have been present at Antietam (primarily camp followers), I was surprised to learn that eight soldiers who fought at Antietam were women disguised as men.  Seven were Union soldiers, and one was Confederate.  There is a very thoughtful and interesting review of their efforts on a blog I found here.

Despite the historical accuracy of women participating in the battle, according to this Washington Post article, it wasn’t until 1993 that women were allowed to dress as a man in reenactments at the battlefield.  U.S. Judge Royce C. Lambert ruled in the favor of Lauren Cook Burgess, a woman barred from dressing as a man in the 1989 reenactmant at the Antietam.  According to Clint Bolick, the lawyer who represented Ms. Cook Burgess free of charge, “National Park Service officials often operate the parks as their own personal fiefdoms.  Perhaps this ruling will serve as a warning shot and prevent the need for heavier artillery to safeguard individual rights in the future.”

You can’t walk away from Antietam without a better understanding of the brutality of the Civil War.  Yes, I’ve read about it, but physically visiting a place is very different from trying to understand through the simple facts presented.  This place definitely creates a connection to the historical event.  I also can’t help but reflect on war in general, and for me, it would be hard to avoid the simple truth that that money and human dignity always seem to be at odds when war is involved.  Antietam is one of the more moving historical battlefields I’ve visited, and I would rate this a “must see” destination. 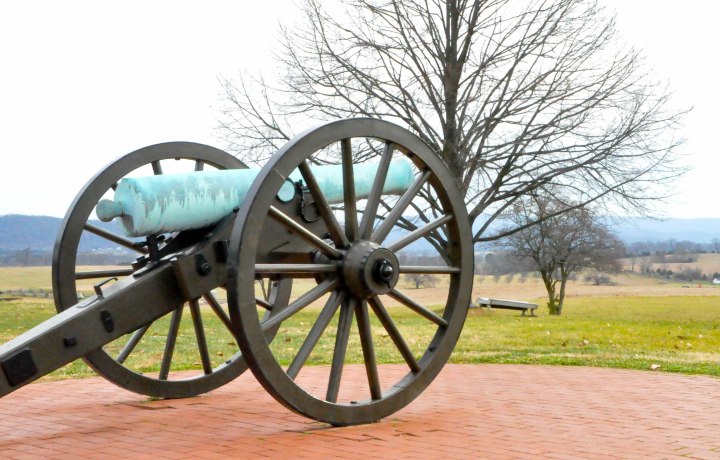 Money spent for this day:
Lodging:  Zero (Thank you to my friend Theresa, who lives in nearby Gaithersburg, MD!)
Annual U.S. National Park Pass:  $80
U.S. National Parks Passport Book:   $9.95
Postcard & Stamp:  $1.30
Meals:  Late lunch @  $14.00  (Note:  The visitor’s center sells snacks only, but there are several restaurants in the town of Sharpsburg.)