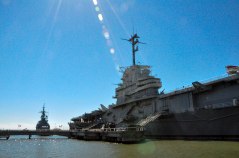 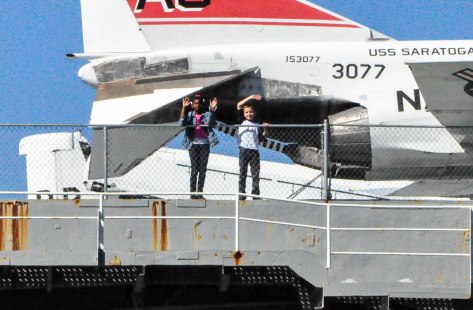 A visit to Fort Sumter was a terrific way to start my big trip.  It’s located on an island in the Charleston harbor, and is accessed via a ferry ride from either Patriot’s Point on the Mount Pleasant side, or from Liberty Square in Charleston.  I left from Patriot’s Point, and as the ferry pulled away from the dock, I found my way to the front of the boat and looked up to see school kids on board the USS Yorktown who were desperately waving from the decks and gleefully calling for the “boat people” to wave.  I laughed to myself and thought how we can all learn from kids and their ability to find joy so easily as I smiled and waved back. We pulled away from the shore and I was enjoying the ride when, DOLPHINS!!!! 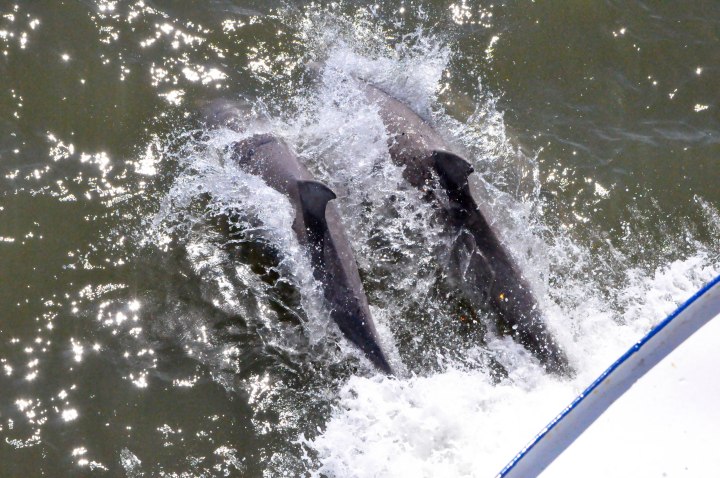 I grew up on a farm in Missouri, and for me, dolphins have a magical quality that immediately instills a sense of delight.  I have never seen them in the waters off of the New England coast, and I can count on one hand the number of times I’ve seen them in the wild.  There were plenty of them in the waters around the boat, but when they started  playing with the ferry and swimming just ahead of the bow, joy quickly settled into my entire body. Any day that starts with dolphins is going to be a very good day!

When we arrived at Fort Sumter, I paused for a moment to consider that this was the first destination of my big trip.  I chose this place because it is where the American Civil War began, and my final destination in June will be Gettysburg, where it ended.  My thought is that it might create some kind of full circle moment for me, but I have no idea if that will be the case or not.  We’ll have to wait and see. 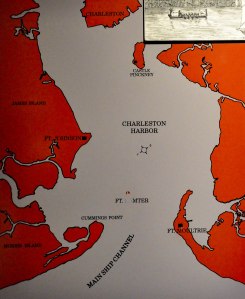 The fort’s location is quite strategic.  Both the Cooper and the Ashley river meet in the brackish waters of Charleston harbor, and Fort Sumter is positioned right at the entrance. The fort was built after the War of 1812 to defend the city of Charleston against potential invasions from the sea.  It is most famous for it’s first battle in 1861, when Confederate forces seized the fort, and thus began the American Civil War.  There are park service rangers and volunteers to greet everyone as they exit the ferry, and passengers are immediately ushered to a short talk explaining the role of the fort over the years, and then a demonstration of the military rifles of that era follows. 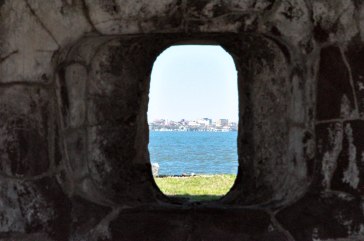 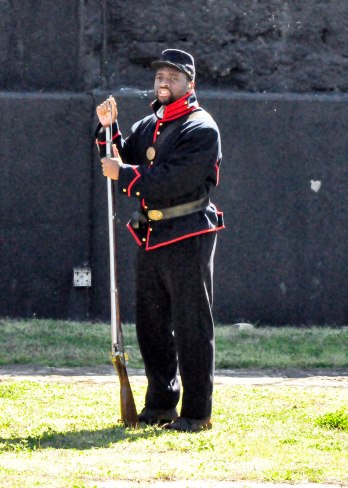 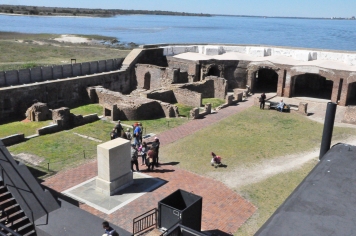 There is a small museum on site, and I found a couple of things to be very interesting, including the renderings of what the fort looked like at it’s peak, and a photo of what it looked like when it fell into decay before it was refurbished as a national monument.   Also of note to me was a map showing which states were on which side during the Civil War. I’ve obviously seen this map before, but it is always interesting to me because as an adult I am still baffled at how my public education taught me that Missouri was “neutral” during the Civil War and we always seemed to skip over it in history class as though it was something that only impacted the eastern states.   I was in college before I learned otherwise, which was that Missouri was deeply divided and that the practice of enslaving people at that time was common even in the Midwest.

Walking to the upper levels of the fort, the view is towards the east and the Atlantic Ocean. It’s quite clear how this location would have been so critical in terms of defending the city of Charleston.  It’s a beautiful view today, which is quite incongruous with the battle stories told around the history of the site.

After about an hour walking around the fort, it was time to head back to the ferry where I enjoyed the views towards Charleston and the tidal play of ocean meeting river.

Overall impression:  I found the most interesting thing about Fort Sumter to be the strategic location, and being on the property gives you a much better appreciation for that. The ride out and watching dolphins play was my favorite part.

Costs for this trip:
Parking at Patriot’s Point:  $5
Ferry ticket:  $21 (Discounts for seniors, children and military)
Admission to Fort Sumter:  Free
Meals:  Snacks available on the ferry.  I brought my lunch and ate on the ride back.