Zion is basically Disney World for nature geeks.  I’m serious.  The parking lots fill up early in the day, so your best bet is to get in line for the well run shuttle that stops at every major beautiful natural attraction you may want to see in the park.  The trail heads mostly start right in the area of the shuttle stop, and there is a nice narration along the way to describe what your options are at each one.  I was surprised to discover the number of people who don’t get off at any stop to do even the easy hikes, and the number of people who go directly to a trail head in order to complete the hike as quickly as possible.  Huh.

There are two major hikes that people do in Zion.  The first is Angels Landing, which is a strenuous 5.4 mile hike up the switchbacks of Walter’s Wiggles and onto the knife-edge ridgeline with 500 foot drops on either side.  This is totally not my jam, but about 600,000 people do this hike every year (and yes, people have died attempting it.)  I did take a picture of the rim where if you look really, really hard you can see the tiny people holding on to the chain in the middle of the trail. 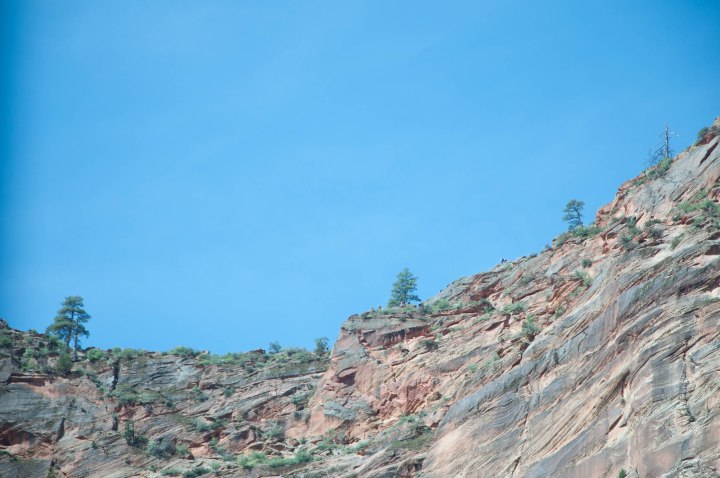 The second iconic hike is the Narrows, which is basically a hike through a slot canyon in the Virgin River.  About 500,000 people do that one every year, and I was planning 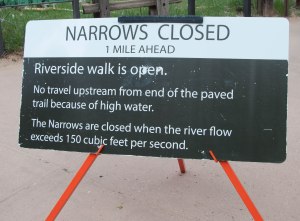 to be one of them until I discovered The Narrows was closed because the flow rate of the Virgin River needs to be at 150 cf/sec for a period of 24 hours before they’ll open it for hikers.   It was at about 500 cf/sec when I was there, so definitely not safe.  That didn’t stop one woman from trying, and the last I heard of that was ambulance sirens as they tore by on the way up to that part of the park.  Seriously, who thinks the National Park service is just trying to spoil your fun with those giant signs warning you not to try something?

OK.  So, most of the people who get up early to board the shuttle before the lines get crazy are headed to one of those two destinations.  I am an early riser, but decided instead to get off the bus by myself, and walk a nice leisurely path from the Zion Lodge to the area called The Grotto.  What I received for that decision, was a quiet, solo experience in Zion. Score! 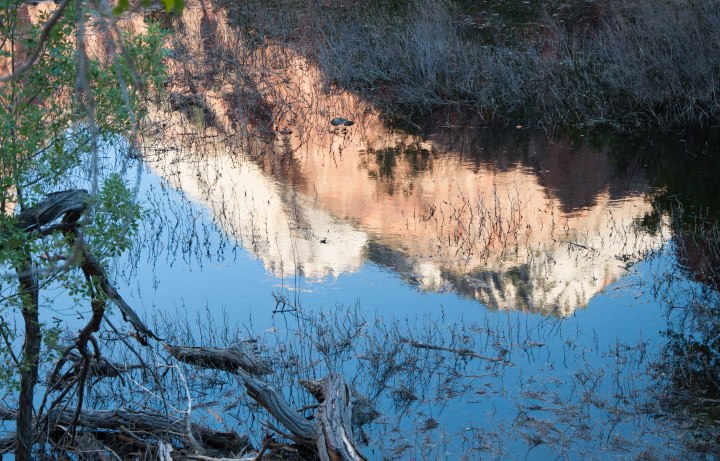 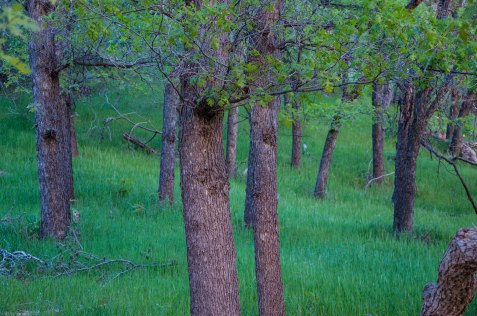 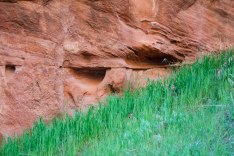 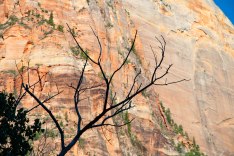 After that relaxing saunter, I briefly flirted with the idea of walking the Angels Landing trail up to the Walter’s Wiggles point, before I realized that I don’t actually care about that trail one little bit.  Instead, I headed up the Kayenta trail (slideshow below), which is a moderate 2 mile climb up to the Emerald Pool. There weren’t very many hikers on the trail with me, and a lovely view through the canyon.  I had a really extraordinary experience when the sun lifted up over the east canyon walls and the red rock around me suddenly illuminated.  It was like a three second period of someone turning up the dimmer switch to full blast. Wow.

I continued to the lower pools (which were the most beautiful, in my opinion), then all the way up to the highest point of the trail, which was the Emerald Pool, which was actually brown due to the early spring runoff.

I also did the Riverside Walk up to the start of where the Narrows is, which is easy and a lovely walk.

The shuttle driver on the way there was pointing out rock climbers on the walls of the canyon like they were wildlife sightings, which was quite amusing and also interesting because I never would have seen them if he hadn’t told us exactly where to look! 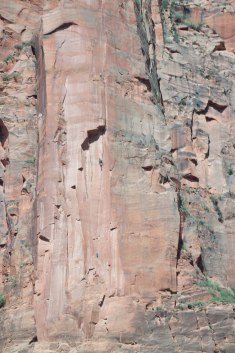 The walk to Weeping Rock is also short and relatively easy, but almost all uphill.  That yielded a nice view as well. 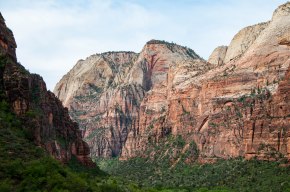 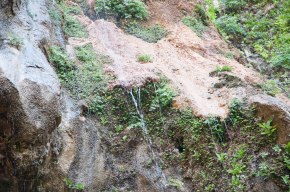 A stop at the Court of the Patriarchs and the Human History museum gave me the opportunity to watch the short film on the geologic forces that formed Zion and what early visitors experienced. 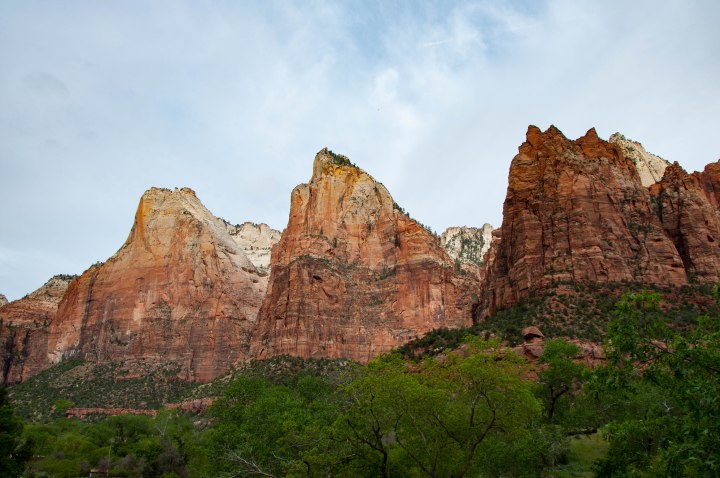 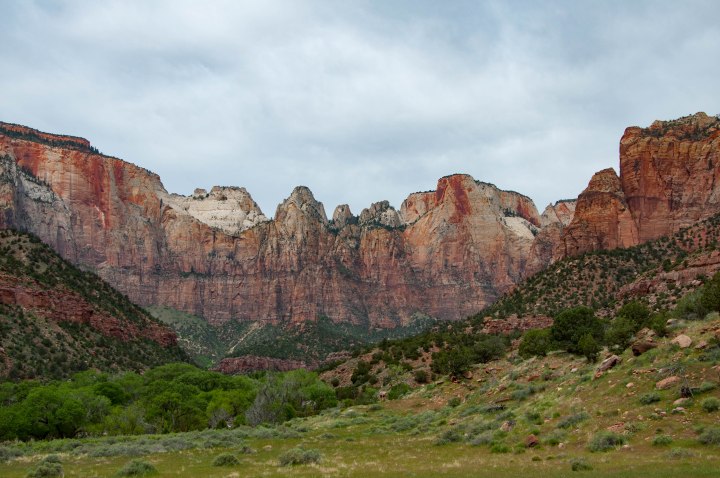 I wanted to also do the hike to Observation Point, but I was running out of time and had to make a decision to do either that, or go see another less visited area of Zion called Kolob Canyons, and I decided to check out Kolob.  Boy am I glad I did, because this part of the park is spectacular, not at all crowded, and I’d never heard of it!

I stopped along the way to photograph the stunning vistas, and drove to the end of the visitors road where the trail head for Timber Creek Overlook took me up a moderate 1 mile trail to a peak with an overlook.  This was also the only place in the park where I saw a sign describing how to actually fight off a mountain lion attack.  I was amused by this and walked away from it calling, “Here kitty kitty!” (because I’ve been alone for too long now), but my fellow hikers weren’t amused so I stopped.

Overall impression:  I am definitely a nature geek, so Zion was right up my alley with beautiful scenery through plenty of hikes to chose from at every level. I was very impressed with the shuttle system!

Costs:  I stayed at the Zion RV Resort, which was $65/night for a pull-through site with full hookups, less a 10% Good Sam discount.  This was one of the nicest RV resorts I’ve seen with full amenities, and is mostly filled with large rigs.  Tent camping is very limited.  I had a late lunch at the Zion Lodge restaurant which was a reuben on gluten free bread and prickly pear margarita, both excellent for $18, including tip.  I had lunch another day at the Switchback Grille in Springdale (just outside the park entrance) which was a very tasty turkey sandwich (also on gluten free bread) and a salad for about $15.

One thought on “Zion National Park”