If you are passing through Cody, Wyoming, you should definitely make time for a stop at the Buffalo Bill Center of the West.  The Center is actually five exceptional museums in one, and is surrounded by impressive sculpture gardens.  I was planning to spend a day here, but after four hours of wandering through the incredibly well curated exhibits, I realized it would be a two day visit and was happy to learn that the second day is free. The next few blog posts are my attempt to capture some of the magic of this place, which was one of my favorite stops. 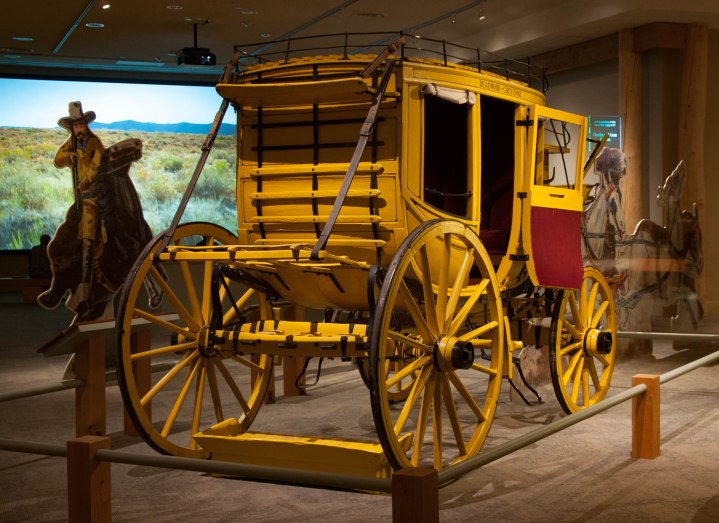 I learned a lot here. Cody’s life was far more interesting, and he was a far more complex person than I had understood before this visit. I also had a vague awareness of the famous traveling Buffalo Bill Wild West Show, but a complete lack of appreciation for how culturally significant it actually was. The display shown below is towards the back of the exhibits, but I’m placing it first because it was the “oooooohhhh…I get it now” moment when I started to understand how huge the show was for its time.

This map shows the major cities where the Wild West Show toured in the United States, which included all of the lower 48 states except Nevada, several locations in southern Canada, and many other smaller towns that aren’t included on this map. Over the course of its 30 year history (1883-1913), the show traveled more than 250,000 miles. That’s roughly the same distance between the earth and the moon, or ten trips around the world.

It was quite a production, offering two admissions daily. The exhibits indicate that the entire show was typically packed up for overnight travel as far as 100 miles (in a time before cars or decent roads), then would be ready in a completely new town the next day.  I have a little trouble believing the 100 miles thing, given the difficulty of travel in those days, but it was a huge production at any case, and clearly run with a high degree of efficiency. In any case, it turns out that constantly relocating the show was far more profitable than staying in any one place. After spending an entire season in South Brooklyn and nearly going bankrupt, Cody decided to keep it moving.

The exhibits walk through aspects of the show itself, which were heavily based on trick riding, roping, marksmanship, and levity.

“[Annie Oakley] finds a shell on the ground.  The boy who is fixing the trap stands ready to pull the string. His back is turned. Whiz! Bang! She throws the shell at him with all her might. The missile goes home, the injured lad gets up hurriedly.  He rubs the injured part of his anatomy briskly, and the audience roars with laughter. [That] touch of [human] nature makes the whole world kin.”

It’s a tall order to try and represent the excitement of a show that traveled more than a century ago, where the primary attractions were horseback riding, shooting, and getting the audience worked up into full belly laughter, but the exhibits faithfully present the artifacts in such a way as to capture the overall tone.

The section focused on Annie Oakley was of particular interest to me, and her coat, saddle, travel trunk and Winchester Arms (Hartford, CT) model 1892 carbine were all on display. Stories from her fellow performers paint a picture of a woman who was a steady shot, with a flair for showmanship and a playful personality. 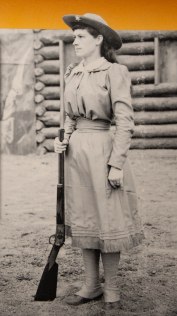 She’s an interesting historical figure; a woman traveling in a male dominated world at a time when women lacked even basic rights, like the ability to vote. I was interested to see her own impressions of what life was like in the show, and there are excerpts of her own writing, as well as interviews, that speak to that.

“The travel and early parades were hard, but I was happy with Buffalo Bill’s Wild West.  A crowned queen was never treated with more reverence than I was by those whole-souled western boys. When a woman was presented to me by any of them, I could stake my life that she was straight. And for seventeen long years I was just their little sister, sharing both their news of joy and sorrow from home.”

As it turns out, Bill Cody was an early feminist. He spoke and wrote about his arrival at the conclusion that women and men were equals, and was clearly influenced by his marriage to a strong, independent woman in Louisa Frederici, who insisted upon having a strong role in their finances. Both men and women in the Wild West Show were paid equally.

Cody’s support for women extended to support for their right to vote, and the exhibits cover that as well. I found it interesting that Wyoming was the first state in the U.S. to ratify the women’s right to vote (1869), despite the view that the eastern part of the country was more progressive when it came to the women’s suffrage movement. The reason for that isn’t entirely clear cut, and appears to rest in a blend of the pioneering spirit of women in the west, and a need for the state to increase their voter numbers. Giving women the vote gave Wyoming more voting citizens, and therefore more representation.

The exhibit walks through the character of The Wild West Show, which surprisingly wasn’t just a place where women and men were treated equally, but also a place where a conglomerations of many nationalities, including “Mexicans, Cubans and Cossacks” were reported to be all living and traveling in harmony, as a kind of a United Nations of the Wild West. By the late 1890s, the show featured performers from nearly every continent, offering audiences the opportunity to explore diverse cultures firsthand.

There were many chapters in William Cody’s life, and each is presented in turn, including his time as a civilian scout for the U.S. Army, his time as a hunter of bison, and his return to ranching after the Wild West Show ended. Cody died in 1917 in Denver, Colorado and is buried on a grave site at the edge of the Rocky Mountains, looking out over the Great Plains.

Overall impression:  The story of Cody’s life was far more interesting than I realized, and the exhibits do a fantastic job of capturing the imagination. It’s important to stop and read here, as it’s not a life story that unfolds in an obvious way from just the items presented.

Cost:  Adult admission is $19, and includes a second consecutive day return option.  I asked if I could come back later in the week instead, and they readily accommodated that by making a note on my ticket receipt. There is a small and adequate cafe on the premises for snacks and lunch, but expect to pay the typical high prices associated with being a captive customer.

One thought on “Buffalo Bill Museum: Life and legend of Buffalo Bill and the West he loved.”