I think it’s fair to say that this project would not have started were it not for Mount Rushmore.  If you are a member of the Sioux Nation, watching Rushmore construction on land that has been unlawfully taken from you (the Supreme Court of the U.S. confirmed this already, so that’s not a debatable point), and also watching the emergence in stone of faces that have nothing to do with your history, I suspect it’s easy to imagine the creation of your own monument project in response.

The vision for this site however, includes not only this massive mountain carving that when finished will dominate the horizon at 563 feet high (the entire Rushmore carving would fit into just the head of Crazy Horse), but also includes an American Indian Museum, an American Indian University, and recreational facilities.

Construction of the Crazy Horse Memorial began in 1948, and continues today without any Federal or State funding.  It was not completed during the lifetime of any of those who launched the project and indeed, it may not be completed during my lifetime either.  The slow pace of the project is primarily due to its financing source, as it is entirely funded by entrance fees and donations.  There is plenty of criticism of this effort, and many who view it as a folly that will never be completed.  I’m inclined to believe otherwise, and I felt like there were clear parallels to another place I visited several years ago, La Sagrada Familia in Barcelona, Spain.  That great cathedral was also not finished within the lifetime of either of its two main architects, ongoing construction is funded entirely by visitor donations, and it started with a design including things that no one had ever tried before.  Great pro

jects like these are not born of skepticism, but a nearly irrational optimism.  They don’t move forward with doubt, but with resolve.

This particular project began with an idea, and then a letter from Lakota Chief Henry Standing Bear to a self taught sculptor named Korczak Ziolkowski, who at the time was living in West Hartford, CT.  Ziolkowski was accomplished and well recognized, even winning first prize for his work at the 1939 World’s Fair.  He also briefly worked on Mount Rushmore.  The World’s Fair notoriety led Chief Standing Bear to write Ziolkowski a letter, asking him to consider the project and later explained,

“My fellow chiefs and I would like the white man to know the red man has great heroes, too.”

Ziolkowski accepted Standing Bear’s invitation and relocated to the Black Hills in 1947, living in a tent for seven months before he was able to construct a rough log cabin.  The first blast on the mountain was the following summer, attended by five survivors of the Battle of Little Big Horn.

Who was Crazy Horse?

Crazy Horse was a 19th century leader of the Oglala Lakota in the Black Hills area.  He famously and frequently took up arms against the U.S. government to fight against encroachment by white settlers on Indian territorial lands, and to preserve the traditional way of life of the Lakota people.  He participated in many famous battles, including the Battle of Little Big Horn, and was well known and respected among the Sioux.  All of these things made him an excellent candidate to represent the spirit of what Chief Standing Bear and others intended for this space.  When finished, the monument will encompass not only the carved shape of Crazy Horses’s head, but also his horse and his arm and hand pointing out over the territorial home of the Lakota, representing his famous quote,

“My lands are where my dead lie buried.”   Crazy Horse 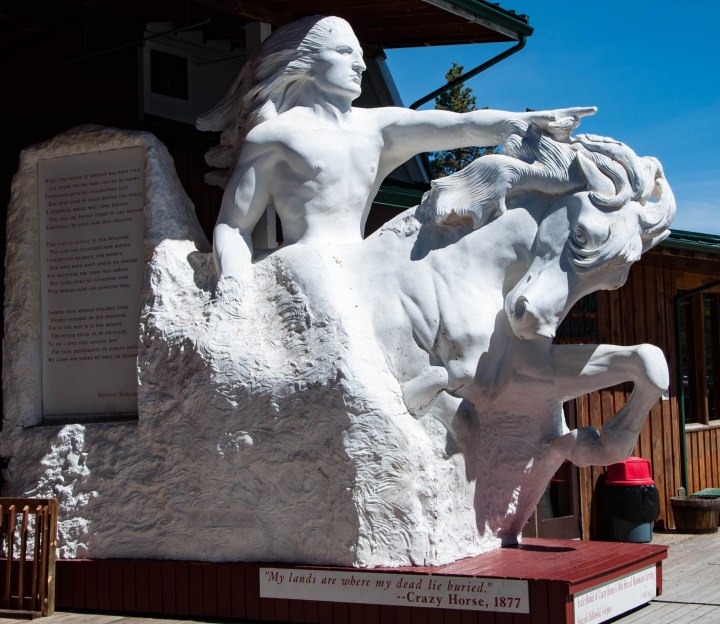 Today, the campus includes a 40,000 square foot Welcome Center, a Native American Education and Cultural Center, The Indian Museum of North America, Conference Facilities, a restaurant and a gift shop. There is a movie that all visitors are strongly encouraged to see before moving on to the large wall of windows where you can observe the work being done on the monument, and the rest of the center’s offering follow a logical progression from there.

The museum collection is excellent, and contains a number of very interesting and thought provoking pieces on display.

The welcome center also has a large open space that allows artists to set up booths to sell their work.  I was very happy to encounter Evans Flammond Sr., a respected Lakota artist.  He is a self-taught painter who uses vivid colors and allegorical content that strongly invokes Lakota tradition.  (The photos below distort both the image and colors, and are provided just to give you an idea of what I’m talking about.) 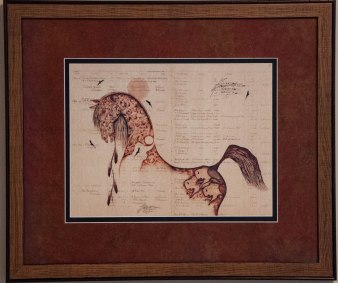 One of my general travel rules is to not buy souvenirs.  I prefer to spend my money on the experience, rather than on “stuff”, and I feel that my photographs allow me to bring back the most accurate representation of that.  Souvenirs are also expensive, and often made in China from plastic, so there’s that.  I do occasionally however, and with a highly discerning eye (because I live on a budget just like most folks), purchase things from local artisans I meet along the way.  I had been thinking about ledger art ever since I was introduced to it in the Grand Tetons, and even considered purchasing some while I was in Cody, but had been warned to be careful as it was sometimes counterfeit or priced unfairly.  Buying direct from an artist seemed like the perfect solution, and I had stumbled across one who was internationally known and was willing to explain the meaning behind the specific paintings I was interested in. He even agreed to sign the two prints that I purchased (photos above.)  I later discovered that his work is highly collected, and I encourage you to click on this link to Mr. Flammond’s site to see more of it, including his work in other mediums (his work on buffalo hides is astoundingly beautiful), and the story of his artistic journey, which is interesting.

After wandering around a bit more to visit the old log cabin and sculptors studio , I stopped for lunch at the Laughing Water Restaurant, which had an excellent lunch buffet with good service at a fair price.  On the way out, I grabbed a free rock from the bin offering a piece of the mountain’s granite that has already been blasted away to take home.  It sits in my garden now as a reminder to me of the power of optimism.

I did not visit this part of the campus, but I think it’s worth mentioning the Indian University of North America, which opened in 2010 in partnership with the University of South Dakota.  The University offers a full semester of college, as well as paid internships at the Memorial.  Students may leave the facility with up to 12 transferable college credits and in the first six years of operation, 160 students (86% Native American)  from 26 tribes in 16 states have successfully completed the program, then matriculated on to a variety of colleges and universities around the country.

The entire project operates under the governance of the Crazy Horse Memorial Foundation, which in turn is led by Ziolkowski’s descendants and a Board of Directors.  There is longstanding criticism of the foundation for it’s relatively lacking representation of Native Americans on the Board, which I think is fair; but overall this facility is very well run, has a lot of merit as a cultural center, and is definitely worth allotting at least a half day to visit.

Admission is $12 per person, with a limit of $30 per carload, and includes ample parking.  I was towing my camper and found the RV parking area to be very navigable.  There are extra fees for special events or things like a shuttle ride up to the base of the monument to see the construction up close.