The most important advice I have for anyone traveling anywhere can be boiled down to two words:  be flexible.  It sounds simple, but for a person who leans towards control freak tendencies (that would be me), it can often be a challenge.  It means that I have to let go of the mental pull towards detailed itineraries and goal directed behavior and instead listen to others, compromise, and embrace a willingness to try things that I might not be all that interested in.  I’ve learned to go ahead and surrender to a more flexible mindset though, because over the years it has allowed me to experience places that have surprised me in a really nice way.  The “be flexible” rule has resulted in visits to places like the Cité de L’automobile in Mulhouse, France (I’m not a car person, but my son is, and this place is fascinating), The London Bridge Experience (I don’t like scary things, but my daughter the theatre design major does, and it was a lot of fun) or the insane patch of moguls on the black diamond run at Beaver Creek Ski Resort (which, twenty years later, I still have not entirely forgiven my husband for.)  The downside of course, is that there is always a risk that you aren’t going to enjoy yourself; but I find that rarely happens.

So, in the spirit of being flexible, I headed off to the South Dakota Air & Space Museum, which my son was very interested in.  He’s about to graduate from CU Boulder with a degree in engineering, and has been an aerospace nut since he was a little kid.  As I watched him wander around the outdoor exhibit of several fighter jets, in my minds eye all I could see was the five year old version of him climbing into the cockpits of the helicopters and planes at the New England Air Museum, which is close to our home back east.  Moms. 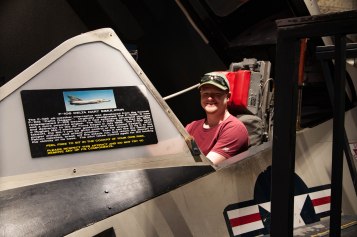 The SD Air & Space Museum showcases over 30 vintage military aircraft ranging from World War II bombers to the modern-day B-1 (these are mostly outside), and also has military missiles on display, including a Minuteman II Intercontinental Ballistic Missile.  The interior galleries and exhibits focus on history in aviation and innovation.  The museum is located adjacent to the Ellsworth Air Force Base (there is limited availability on a tour of that facility for a fee), and the focus here is on military aircraft and history.  I wish I could tell you all about the fascinating planes here, but one military plane looks like another to me, and so I’ll focus instead on the parts of the museum I found interesting.

Since we had just visited the Minuteman Missile National Monument, I was surprised to see the replica of the launch command center that is included in the exhibits here.  I wasn’t expecting that, but it was interesting to see, especially the little diorama of the facility undergrond. 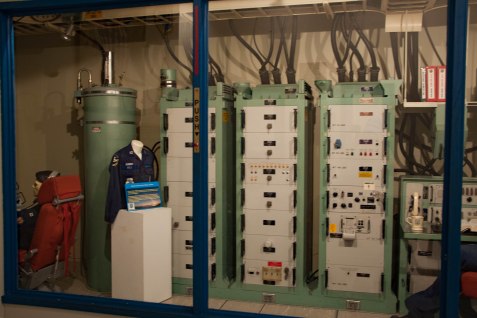 Also in this area was a two poster sized display that attempted to list the important dates of the Cold War.  I found it a very uncomfortable to read, as though someone had attempted to synthesize an abbreviated history lesson of a very complicated time.  The dates were all there, but it didn’t capture the essence of living through that time at all.  It reminded me a bit of the failed attempt to create an entablature at Mount Rushmore to capture the history of the United States. 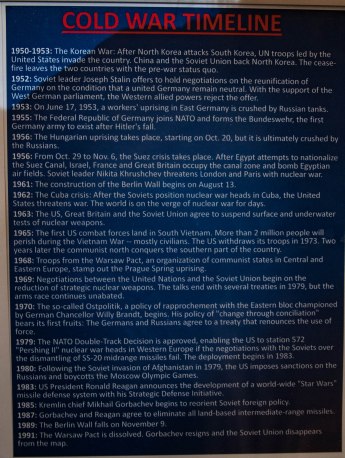 I was intrigued by an exhibit of bomb arming pins.  Munitions personnel removed these pins from bombs prior to the aircraft taking off on their bombing mission.  The collection on display here were all removed by one individual, who recorded the date of the mission, the target area, the weight of the bombs, and the pilot’s name.  It was a very somber collection.

The most interesting exhibit for me though, was one entitled Land as Art, which gave an overview of the Landsat Program, a joint research efforts of the U.S. Geological Survey (USGS) and the National Aeronautics and Space Administration (NASA).  Since 1972, Landsat satellites have been gathering images of earth from space, which now represent the longest continuously acquired collection of space based moderate resolution, land remote, sensing data.   There is a large shaded relief map of the elevation layer of the United States, with no markings to delineate state boundaries or roadways.   After spending more than three months following road maps around the U.S., it was fascinating to just stand and study this map which presented the topography alone.

The relatively long history these images have captured in the more than four decades since the program and its satellites were launched, allows us to see changes to earth over that time from an important viewpoint.  Changes in geography, the footprint of forests and cities, and the impact of global climate change can all be viewed and measured to a high degree of resolution.  Beginning in 1999, the National Elevation Data Set became available for study at a resolution of 30 meters.  Landsat images are used to study everything from the size of glaciers to the predicting malaria outbreaks.  The images are beautiful and you can see the entire collection here.  One of the exhibits located at the museum was very poignant.  It showed the changes in the Aral Sea since 1977.  Once the fourth largest lake in the world, water diversion projects have limited the flow so that the Aral Sea is now a fragmented series of smaller bodies of water.  As the size of the sea has diminished, noticeable changes in the climate of the areas surrounding the sea are visible, and the things like increased sandstorms are now impacting the area.  The Landsat images capture quite dramatically how humans have altered the planet here.

Overall impression:  Watching my son happily wandering among the planes made my day, but my second favorite part was the reminder about the Landsat program, which I had completely forgotten about.  Since this visit, I’ve wandered onto the NASA web site several times to check out those images.

Costs:  Admission to the museum is free, however a donation is always a nice thing to do.  The tour of the Air Force base requires an extra fee of about $10.  Inquire about that ahead of time if its important to you, because they aren’t always running.  There is a small gift shop on the premises which offers snacks, but no cafeteria.