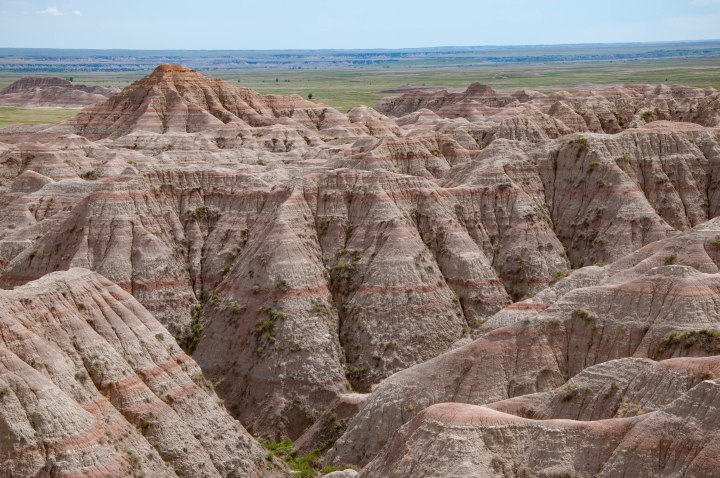 I arrived in the Badlands expecting a harsh landscape. It was the Badlands after all, and that name conjured up images of movie star cowboys heading into rock canyons with no water or food to hide out from lesser known movie star cowboys (you know, the kind who specialized in evil dastardly deeds.) I even whistled the classic “do-wee-oo-wee-oo” sound to myself as I reached the western edge of this desolate land, and was grateful to have booked myself into a campground with full hookups so that I could take a break from the mid day heat for a nice air conditioned nap. Harsh landscapes are a lot easier with modern conveniences.

My son drove up from Boulder, Colorado to join me for the weekend and I was one happy mamma to see him; grateful for the company after so much time alone. Our plan here was to take early morning hikes to explore, rest during the midday heat, then hit the lookout points for evening sunsets, followed by dark skies viewing at night. Our first morning hike would be the Notch Trail. It works it’s way through a kind of gully, then up a ladder before continuing on to a lookout point facing east. Along the way, there was a surprising amount of life including tiny flowering plants, and mud homes for some kind of flying creatures along the shadiest parts of the formations where we discovered nature had sculpted the face of a frowning man in sunglasses. The view at the end looks over the easternmost edge of the park and out to the grassland prairie beyond. It’s a very easy trail and we finished just as the sun was beginning to heat things up beyond my comfort zone. If you do this hike, be sure to remember a hat, sunscreen and sunglasses! The white rocks here definitely reflect intense sunlight right back at you.

We took advantage of the air conditioning in the truck to take a drive around the main loop of the park during the midday heat, and I was surprised when we encountered buffalo meandering around a prairie dog town on western side.  The Buffalo Gap National Grassland surround this park, so it makes sense. 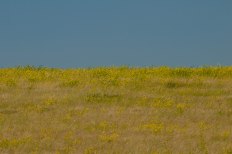 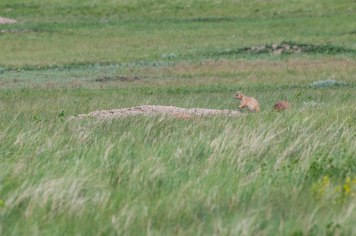 The dramatic rocks of the landscape mingled with the gentle spring green of the prairie and the huge cloudy skies overhead to create views that were magnificent. 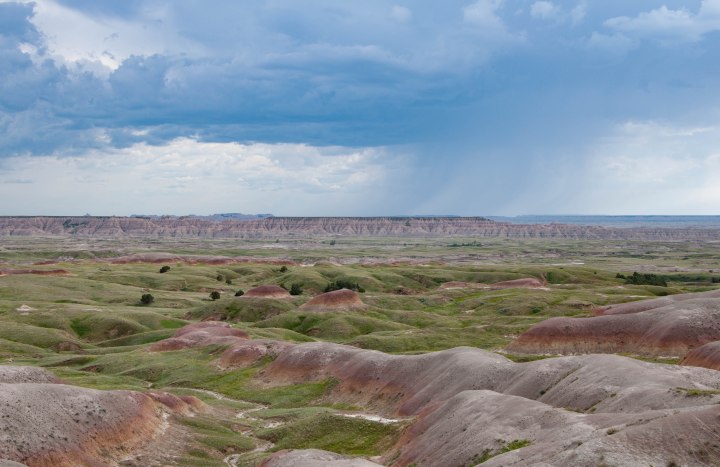 After scoping out the best points to return to for good sunset photographs, we made plans to return later in the day and headed back to the visitor’s center.

When we returned to the Pinnacles Overlook in the late afternoon we were greeted by a landscape that was quickly shifting in terms of color, and as we stood at the edge of the cliff waiting for the evening sunset, bleating sounds started coming from below. For the next hour, we stood and watched as Rocky Mountain Bighorn Sheep began to emerge from the rock formations, making their way up the impossibly steep walls to what was obviously their night refuge. As the first ones arrived at the top of the formation, they began to call back and forth to each other until slowly, a large group of them, many with tiny offspring, slowly climbed their way to safety. It was a complete delight to watch these babies occasionally and briefly emerge from the underbrush as they made their tiny hops trying to catch a glimpse of there they were heading. Along the way, they stopped briefly to nurse before continuing on, until all of them were settled in for the night.

Even once the sheep were settled, the show wasn’t over, as the sun continued to intensify the colors of the rock.

Behind us, where the sun was setting, the same yellow and red highlights were accenting shades of green, blue, pink and purple. 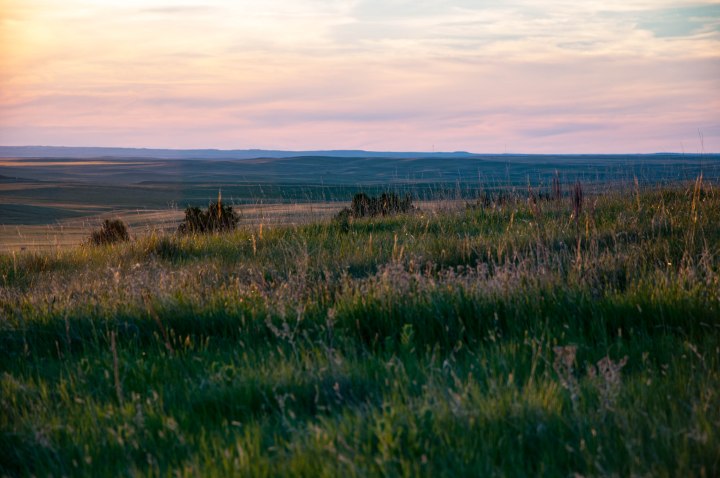 Between the sounds of bleating sheep and the motion of the prairie grass and the colors that were shifting around us in a fantastic display of light, I realized this is not at all a barren landscape. It’s full of life, and the most unexpected stop on my trip so far.

Overall impression:  I loved this park so much that I’m planning to include it again in a future trip that takes the northern route across the country up into the Pacific Northwest. I think the strategy to hike early morning, then take advantage of a midday break before enjoying the sunsets and night skies worked very well. I do not tolerate heat well, so that’s my point of view.  We spent two days here, and that gave us a nice sampling of the park, but I definitely think it’s worth a longer visit.

Admission to the National Park is $20 per vehicle for 7 days. Our entry was covered as part of my National Park Pass.  The White River KOA campground has pull through sites starting at $50/night, with a discount for KOA membership, and has full amenities including a pool, laundry facilities and a small camp store. The sites were flat and ours had shade, a picnic table and a fire ring. Camping options inside the park range from primitive and free to about $37/night at the Cedar Pass campground with electric hookups and a dump station. The Cedar Pass campground has the advantage of ranger led programs, including one that focuses on the night sky, which is spectacular here due to the remote location. The KOA campground is only about 10 minutes away though, and I would definitely stay there again just for the additional convenience and because you can drive up to the park for the night programs anyway.

I highly recommend bringing your own food and cooking at your campsite. The grocery store in town is tiny, sparse and expensive with no produce or fresh meats. There is a cafe at the Visitor’s Center (not great) and a couple of small restaurants in town (we skipped.)