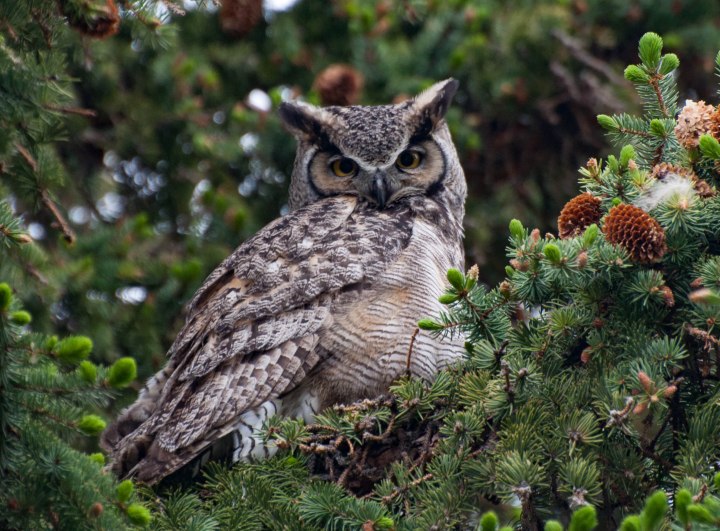 Cody is a small town, but big enough to offer all of the services you’d expect in a medium sized city, with lots of entertainment, dining and lodging options. Just 50 miles from the East entrance to Yellowstone (a stunningly beautiful drive), with an altitude below 5,000 feet, it’s a perfect place to stop for a few days to rest and regroup if you are visiting the national parks. This is partially why the population of just under 10,000 doubles most nights during the tourist season, and just knowing that makes me wonder what it’s like to actually live here. Cody’s world famous rodeo is open every night all summer long, and attendance at their annual 4th of July celebration and parade is massive.

My last few posts have all been about different things to do in the area around Cody, including the Buffalo Bill Center of the West and Heart Mountain (definitely go read those!) but since I spent about a week there in an effort to just recharge a bit after three months of travel, I wanted to include one final post to highlight some of other fun things I discovered.

I was fortunate enough to capture photos of a family of great horned owls, including three owlets. I quietly circled the tree for about an hour and a half, and waited for opportunities to capture shots of the babies, which still had quite a bit of their soft, furry feathers. Their pale fluffy appearance made them look more like adorable stuffed animals than the mice eating machines they are that age. (Owlets this size eat up to 15 mice a day.) After about five minutes of watching to see what I was about, the mamma owl decided I was boring and went back to sleep. That was a very good sign, because it meant my presence wasn’t threatening to them, and I felt comfortable shooting photos so long as I wasn’t disturbing them. One of the babies stayed tucked in and napping, one took a bold stance and proceeded to rotate it’s head around in a kind of dominance display, and my favorite one stayed behind a branch the entire time giving me a one-eyed look that said, “Go away.” Eventually, the adult male (who had stayed deeply hidden in the tree for the entire time) seemed to decide he’d had enough of my meddling, and swooped down over me and just barely above my head.  Fair enough sir, I have my photos and now I’ll leave you alone! 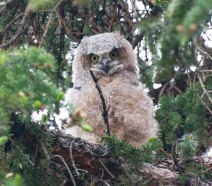 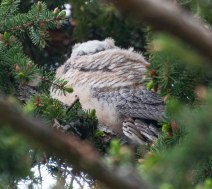 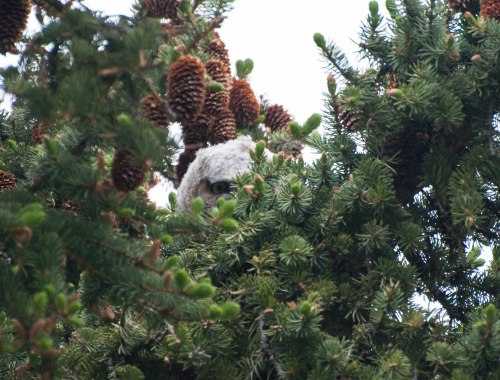 How did I find them? The same way I found most of the interesting off the beaten path stuff.. from a local. In this case, I stopped to have my hair done at Studio 21 (where they did a fabulous job, by the way) and it turned out the stylist is also a photographer and volunteered to drive me over to the spot where he found them. Never underestimate the power of being courteous to people!

Zapata’s Restaurant and Grill – This place serves Western and Southwestern food.  I ended up eating here twice because it was really good, a total bargain, and they accommodated my request for gluten free options very gracefully.   I had the enchilada dinner ($8.29) on my first visit, and the lobster enchilada special the second time around ($10.79).

Irma Restaurant and Grill – The Irma Hotel is worth a stop whether you’re eating or not, since it was built by William F. Cody and named for his daughter, and is on the National Register of Historic Places. There is a beautiful and famous cherry wood bar that was a gift from Queen Victoria and dates back to the initial construction of the hotel in 1902. I had lunch in the room with the old stone fireplace, and the fossil insets in that structure alone are worth a stop! I had the buffalo burger ($11.49), which was overcooked and entirely forgettable, and the service was also not great. I really didn’t care about the disappointing meal however, because the people watching here is fantastic, and it’s clearly a place that locals frequent, so I suspect my dining experience was just an off day for someone in the kitchen. Online ratings also seem to indicate most people have a better experience, so give it a try! 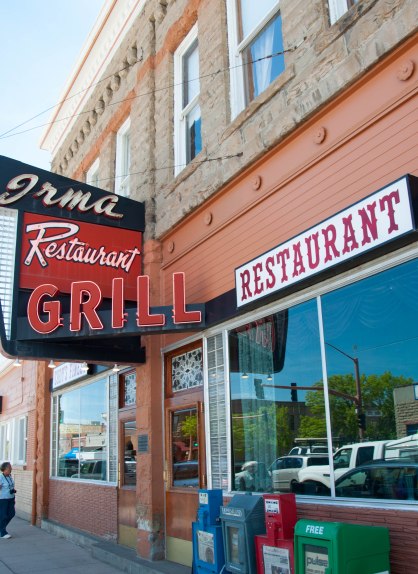 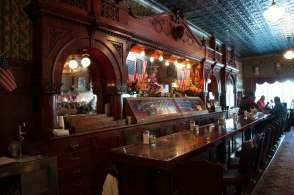 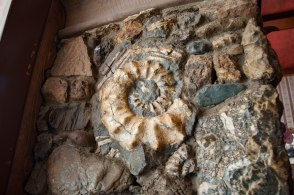 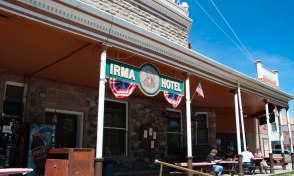 Wyoming Rib and Chop House – This is a classic steak restaurant and clearly a Cody favorite.  I ordered a lunch special, which was a smaller cut steak, was delicious, and cost me $19.

Other Places Worth Mentioning

Friends and Company Quilt Shop – If you are a quilter, make time to stop in here! It’s huge, with over 7,000 bolts of fabric to choose from, and nearly 2,000 of those are batiks. They have quilts hanging everywhere that will get your brain firing with all sorts of ideas, and the largest selection of woodsy western themed fabrics and notions that I’ve seen anywhere. The staff was also very friendly and courteous, and the prices were very reasonable.

Fremont Ford Dealership – This may seem like a strange thing to mention, and is a little out of character for my blog, but I needed to have the oil changed on my giant truck, and the people here were incredibly friendly with fantastic service. They not only changed the oil but checked the entire truck over for me, and topped off all the fluids for less than I’ve paid anywhere for just the oil change. It gave me a lot of peace of mind since it started this trip with only a couple hundred miles on it, and I’d been a lot of places since then! The service representative also gave me ideas for things to see while I was in town.

I loved Cody, and there is so much to do there that I look forward to returning one of these days.  It’s surrounded by beautiful landscapes, and the sunsets alone are worth writing about. 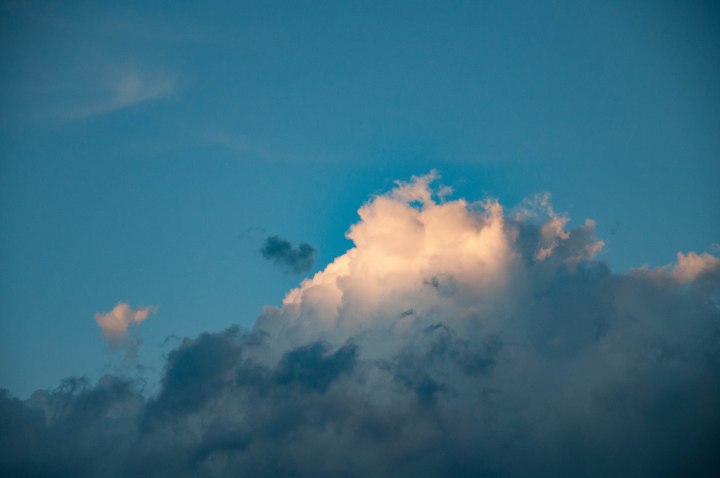 On my way out of Wyoming, I drove through the Bighorn National Forest and I mention it here because while I didn’t stop to spend time there, I think that was probably a mistake. It’s big, beautiful country, and appeared to be far less crowded than the national parks of Yellowstone and the Grand Tetons, so it struck me as a place that would offer really great camping and hiking opportunities. Just the drive through alone took me past gorgeous vistas and more wildlife. It will have to be a destination for another trip. 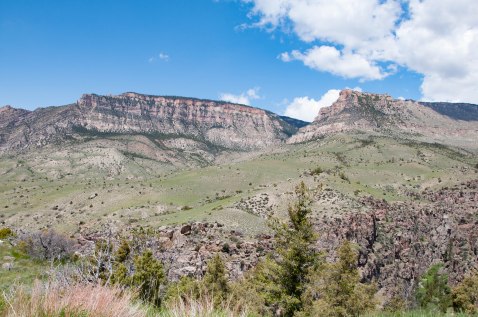 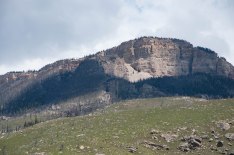 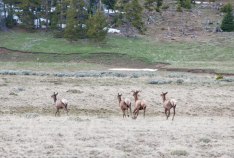 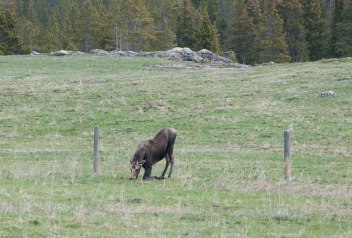 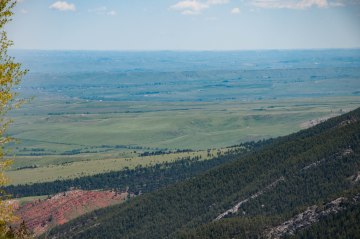 As I drove down the winding slope on the Eastern edge of the Bighorn National Forest, I had the distinct feeling that I was leaving the big mountains behind me.  My trip would now be heading east over vast prairies, and eventually towards New England. There were still some big stops ahead of me, but after three months away, I was starting to get a little homesick. Looking out across the dramatic sweeping vista in front of me, I was still thousands of miles from the east coast, but it felt like I was facing homeward.