For my fellow nerds, the first thing we need to talk about is what we’re actually looking at, because despite widespread agreement on the basics, geologists still aren’t exactly sure about the specifics when it comes to how this tower formed (and no, it’s not hollow.) There is agreement that the tower is composed of an igneous rock (meaning it was once lava or magma) known as phonolite porphyry. “Phonolite” comes from Ancient Greek meaning “sounding stone” because of the sound it produces if an unfractured plate is hit. Phonolite is rare in the U.S.  It’s found in the area around Devils Monument, but primarily in Africa. “Porphyry” means an igneous rock comprised of large grained crystals, in this case feldspar. This type of rock is similar to granite but without the quartz. The tower is made up of thousands of columns of rock that formed as the lava cooled, then cracked in a process similar to that which forms my beloved hoodoos. Geologically speaking, this place is an oddity, to say the least. There are three main theories about how it formed, which you can find here. The one that made the most sense to me, was the Volcanic Plug Remnant theory:

Native Americans have their own stories about how the tower formed. The Kiowa call this rock, “Tso-aa”, a tree rock. Oral history includes the story of young girls who were being chased by a bear and the rock rising up to lift the girls high where the bears couldn’t reach them. When the bears jumped to reach the girls, they scratched the rock, and fell to the ground.” You can see marks on the side of the tower that look like a giant creature scraped away at it. Other stories relate the shape of the tower to a buffalo horn, and from some angles at a distance that shape emerges as well.

After considering my options to explore, I decided to wait for the Ranger Walk which follows the 1.3 mile Tower Trail around the base. That was a very good choice, took about an hour, and here’s what I learned.

Northern Plains Native Americans regard Devils Tower as a sacred site. While the tower is open year round, 24/7, there is a voluntary restriction against climbing during the month of June, out of respect for ceremonial events that take place each year during that month. The sacred nature of the site means it is important to stay on the designated path and to not disturb the prayer flags or bundles left behind. I thought they were beautiful, and added a of gentle reminder of how special this place is.

The Tower Trail is primarily shaded by ponderosa pines, which many species of animals in this area depend upon for both food and habitat. The bark of these trees is beautiful, very thick and its sap is also a fire suppressant. Wildfires are important for ponderosa pine forests however, because they thin out debris and release trapped nutrients back into the soil. To keep the forest here healthy, the park service conducts prescribed fires.  One of the most recent ones was in 2013, and four years later it’s easy to see how that area is now recovering.

The sap of the ponderosa pine has another unique quality; it smells like vanilla. If you get close to the tree bark in an area where there is sap visible, it smells fantastic! 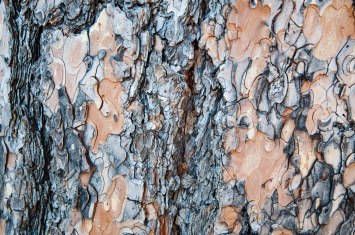 The view from the base of the tower looks out over a gorgeous landscape where the Belle Fourche River carves through red rock and green pastures.

I was admiring the view and the wonderful patterns on the pine trees when I looked down and saw a giant snake slithering across the path. I immediately freaked out, squealed loudly and quickly moved in the opposite direction. It turned out to be a common bullsnake (also known as a gopher snake), and our full-time science teacher and part-time park ranger guide, who also is a snake fan, reached over and picked it up, then gave us all a lesson on the role of bullsnakes in the surrounding ecosystem, all while calmly holding it close enough to his face that it definitely could have bitten his eyeballs.

After the snake was sent on his way, we were given a quick reminder of the “do what I say, not what I do” concept with regard to touching the wildlife (venomous prairie rattlesnakes also live here.) We continued on our way and I took a few photos of climbers on the tower, wondering how on earth they were managing to scale what appeared to be a very smooth surface. Back in our twenties, my husband and I used to rock climb (there are no pictures to prove this so you’ll just have to trust me.) I sent him some of the photos later that day and we reminisced about our climbing days and rolled around the idea that we might come here some day to climb the tower. LOL. That’s not gonna happen.  Still, there are more than 200 possible routes climbers can take up the tower, and it’s been climbed by a wide variety of people including a six year old boy and a eighty-one year old man. If you want to try it, a free permit is required and good luck!

As we looped back around the far side of the tower, we stopped at the boulder field and learned there are about 11 species of bats that live here (that’s a lot for one area.) There are no caves or mines in the area, so it was a little strange to find so many kinds of bats live here, but scientists have recently discovered the bats overwinter in the many crevices of these rocks, including the boulder field and the tower itself.

In our discussion of wildlife in the area, we also talked about the black-tailed prairie dogs that live in their town near the park entrance. They’re adorable and fun to watch, but they bite, are common hosts to bacteria that causes sylvatic plague in humans (there was an outbreak among the park rangers just this past year), and are a nightmare for ranchers, because the tunnel systems they create make holes in the landscape that can injure cattle and horses that accidentally step into them. They also eat vegetation down to the ground, because it makes it easier for them to spot potential predators. Without protected places, ranchers would likely hunt them to extinction and whether I agree with that or not, I can understand why.

When the guided walk was finished, I headed back into the Visitors Center, which is small but interesting. There is a map inside that invites you to place a pin into the location of your favorite National Park or Monument. I’ve been to about a third of the National Parks at this point, and it was fun to see which ones were people’s favorites. There were a lot of votes for Yellowstone, of course, but the unexpected cluster to me was the Badlands.  I would be heading there soon and was encouraged to see how many people were such fans! 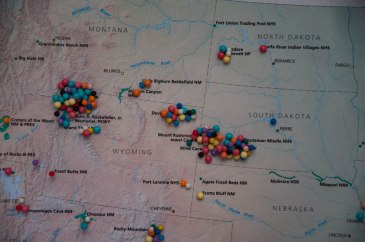 An aspect of the park that I wish I could share photographs of is the incredible night sky! (Sorry, but night photography is not yet in my skill set.) The park is open 24 hours and there are evening programs on astronomy because the remote location means the park enjoys dark skies and a fantastic view of the stars. If you wake up for the sunrise, you can also enjoy a few minutes when the angle of the sun combines with the iron in the rock, to create a stunning display of gorgeous shades of pinks and orange. 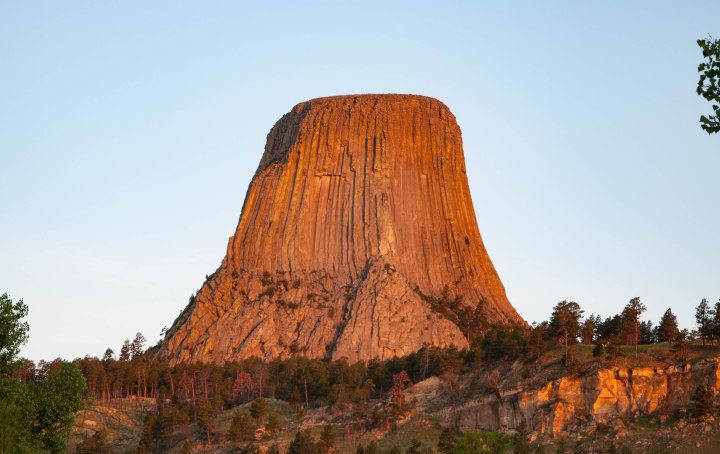 Overall impression:  This is a sacred place for many, a pop culture destination for “Close Encounters” fans, a challenge for rock climbers, and a beautiful place to hike and camp. For me, it was a combination of all those things.  The location is remote, so be sure your gas tank is full when head into the area.  I stayed at the KOA campground just outside the park entrance, and the sunrise picture above was taken standing directly outside my camper, so the location is ideal.

Costs:  Admission to the park is $15 for a 7 day single vehicle pass that covers all passengers.  My admission was covered by my annual National Park pass.  Rates at the KOA for a pull through travel trailer site start at about $65/night.   There is a restaurant on site with very limited offerings and very high prices (I recommend you bring your own food).